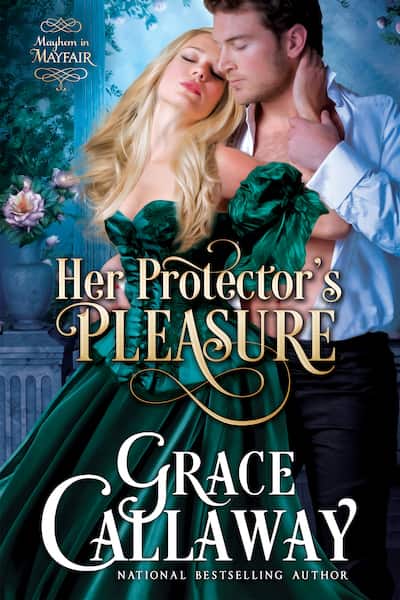 ** DISCLAIMER: The following excerpt contains explicit content intended only for adults. By accessing the content on this page, you affirm that you are over the age of 18. If you are under 18 or offended by material that is sexual in nature, you are advised to leave this page immediately. **

“I can’t believe you shot me,” the stranger said and not for the first time since they’d boarded her carriage.

“I wasn’t aiming for you. You got in the way of my bullet,” Marianne said.

Really, the man could show a bit more gratitude seeing as how she’d saved his life. She’d let off the shot to deter the advancing cutthroat; seconds later, her trusted manservant Lugo had arrived. The sight of Lugo’s imposing form and stern ebony profile—not to mention his double-barreled Flintlock—had sent the ruffians scurrying off into the night. She’d waved off Lugo’s apologies (a mob in the street had detained his arrival) and asked him to load her would-be rescuer into the conveyance.

Now the vehicle rolled smoothly along, and the big man with the intriguing amber eyes scowled at her from his corner. Somewhere along the way, he’d lost his hat; his mahogany hair—neither curly nor straight, but somewhere in between—gleamed beneath the carriage lamp. Long of limb and dressed in a greatcoat that had seen better days, he looked at odds sitting against the plush lavender squabs. He clasped his injured arm with one large hand; with a twinge, she noted the crimson seeping through his fingers.

“Let’s have a look at that.” She went over to his side of the carriage. When he backed away from her, she said with a hint of asperity, “Hold still, will you? I’ve just had the upholstery changed, and you’re bleeding all over it.”

He gave her a dark glance, but when she gestured for him to remove his greatcoat he obliged. Her heartbeat kicked up at the red splotch on his left sleeve. Yet he said nothing, staring straight ahead as she withdrew a handkerchief from her reticule and wrapped it around the wound. Beneath the rough linen of his shirt, his bicep—an unexpectedly solid ridge of muscle given his lean form—gave a twitch, but other than that he betrayed no sign of pain. Another surprise. In her experience, males became indistinguishable from babes when it came to the loss of blood.

But this fellow … he was different from other males. She didn’t like the fact that she found him difficult to read. His face possessed little in the way of beauty, but she supposed there was a certain character to the ascetic lines. The set of his strong jaw suggested he was a man of perseverance. One who’d weathered hard times—if the gaunt hollows beneath his cheekbones were any indication. Only a full mouth and faint laughter lines at the eyes saved him from complete austerity.

At present moment, his curiously bright gaze was hooded, and she realized that she was not the only one making an assessment. His lips formed a tight seam, as if he found her … lacking? A rare appraisal indeed from a man. She acknowledged this without vanity: she knew the fact of her physical beauty and its effect on males. Her looks had proved both a blessing and a curse. And rarely did anyone bother to look beneath the surface.

If they did, they would encounter something quite the opposite of loveliness.

She secured the handkerchief with a knot and enough pressure to make a muscle leap in the stranger’s jaw. “I think we’re overdue for introductions,” she said. “Who are you?”

“Ambrose Kent, at your service.” He inclined his head. A wary motion.

His name rang a bell. “You are acquainted with the Hartefords.” Her eyes narrowed. “A constable of some sort, aren’t you?”

Something flickered in his gaze. Perhaps he caught the edge of derision in her voice. In her experience, so-called upholders of the law used their power against those whom they were supposed to protect. A case in point: Skinner, the blasted Runner she’d once hired to find her daughter. She wouldn’t trust a thief-taker, Charley, policeman—or, for that matter, any man—farther than she could toss him.

“I’m a Principle Surveyor with the Thames River Police,” he said stiffly. “And with whom do I have the pleasure of speaking?”

At the mention of her title, the tension lines deepened around his mouth. Interesting. Doesn’t like the peerage, does he? Yet from what she could recollect, her friend Helena, Marchioness of Harteford, had positively raved about this Mr. Kent. Apparently, Kent had helped to solve several thefts for Helena’s husband and had once saved the Marquess of Harteford’s life. Harteford—another stoic type—apparently got on with Kent, though heaven only knew what a marquess and a policeman had to talk about.

Intrigued, Marianne continued to peruse her companion. If it wasn’t titles he held in contempt, then perhaps it was something particular to her? Perhaps he knew of her reputation; perhaps he shared the pulpit with the priggish, hypocritical types who’d dubbed her “The Merry Widow.” Who scorned her for making full use of the freedoms that were hers by right—by virtue of the five years of hell that had been her marriage and the grief she continued to endure to this day.

Anger straightened her spine. “Does my reputation precede me?” she said coolly.

“Your reputation?” His brow furrowed.

So he hasn’t heard the rumors about me—well that’s not surprising, is it? We hardly move in the same circles. Either way, ’tis not as if I give a damn what he thinks.

“If you don’t mind my asking,” he said abruptly, “what were you doing alone in that area of Covent Garden and at this time of night?”

Marianne’s jaw slackened. It had been a good long while since anyone had taken her to task to her face. That this rawboned policeman in his shoddy clothes would presume to do so rankled her. After all that she’d survived, she was her own woman; she answered to no one. She responded with icy calm, a weapon she’d honed amongst the ton.

“Not when it endangers your life and those of others who must rescue you from your folly.”

The nerve of the man. “I didn’t ask for your help,” she snapped.

For the first time in years, Marianne felt her composure crack a little. “I was not screaming. I was alerting my man Lugo to my whereabouts. At any rate, I had the situation well in hand before you came barging in.” With a start, she heard the irritation simmering in her voice. She drew a breath. When she was once again collected, she arched a brow and pointed a glance at his arm. “Do you doubt that I would hesitate to do what was necessary?”

“I doubt your common sense, my lady. And your ability to control your impulses. No pursuit of pleasure could be worth taking the risk you did tonight,” he said grimly.

That did it. The judgmental pedant thought to govern her, did he? A memory slipped through before she could stop it: kneeling between Draven’s withered thighs, shame and fear making her gag. Try harder, you useless cunt, or you shall never see your little Primrose again …

Chest constricting, she pushed the image aside. Let out a breath. From the moment of Draven’s demise, she’d sworn to be her own mistress. No one—least of all this sanctimonious nobody—would ever control her again.

Fury cleared her mind, made it as sharp and crystalline as ice. A plan took shape in her head, and its simplicity nearly made her smile. Lecture me, will you Mr. Kent? Well, we shall see who learns the lesson this eve.

“Obviously you haven’t been pursuing the right pleasures,” she drawled. “As a widow, I can assure you that certain delights are worth any risk.”

His dark brows drew together, color spilling over the ridge of his cheekbones. Good—she’d shocked the prig. Before she could enjoy the spark of satisfaction, however, he said in dogged tones, “This isn’t about me. It’s about you and your disregard for your own safety. Many a constable’s work would be lessened if only people practiced common sense—”

Her sarcasm did not escape him. Despite his holier-than-thou attitude, Ambrose Kent was apparently no idiot. “I have seen suffering in my line of work,” he said, “much of which could have been prevented with a little forethought.”

“Indeed,” she said in a bored voice.

“I do not wish to preach, my lady, only to be of service.” The muscle along his jaw ticked again; Kent was not quite as unflappable as he wished to be. “If you think yourself above my advice, then don’t take it.”

“Above, sir? Not at all. In point of fact, I am in need of your services at this very moment.”

His eyes—the shade of light filtered through amber—narrowed at her.

“We have arrived at my home,” she said. The upward sweep of his long lashes indicated that he’d been so engrossed in his righteous dispensing of advice that he hadn’t noticed the carriage stop. “And after the night’s disquieting events,”—she faked a delicate shudder—”I shall require escort inside.”

He frowned. “Can’t your manservant accompany you?”

“He could. But I am requesting your presence specifically.” She bestowed a sultry look upon him, one that typically reduced males to puddles at her slippered feet. The policeman, however, continued to eye her with suspicion. She let her lips take on a seductive curve. “I should like to privately express my gratitude for your intervention tonight.”

His color rose. “If you’ve learned your lesson, then that will be thanks enough.”

My, this man was a challenge, wasn’t he? Her interest piqued further. No male was without his Achilles’ heel. And she had a good inkling where the chink in this would-be knight’s armor was located.

“Perhaps another time, then,” she said in a tone of indifference.

She tapped on the door, and it opened to reveal Lugo’s impassive face. Ignoring the steps, Kent sprung easily to the ground and turned to offer her his hand. She took it, and as she alighted, she purposely missed a step.

Kent caught her. “Are you alright?” he demanded.

Crushed against the solid wall of his chest, she felt a strange wave of giddiness. She spoke, perturbed to realize that the breathlessness in her voice was not entirely feigned. “I must be more overset than I realized,” she murmured. “Thank you, sir.”

In the next instant, Kent swung her up in his arms.

“But your arm,” she said in surprise.

Return to Her Protector’s Pleasure 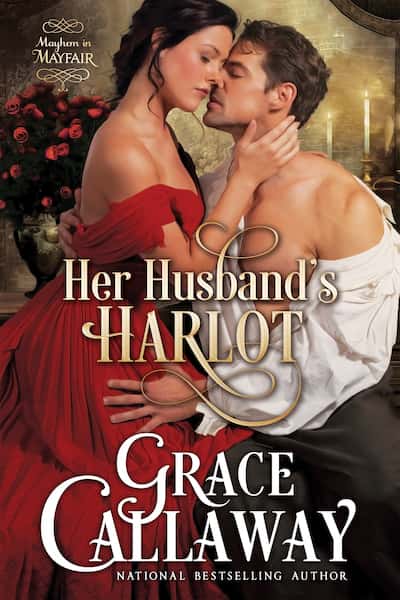 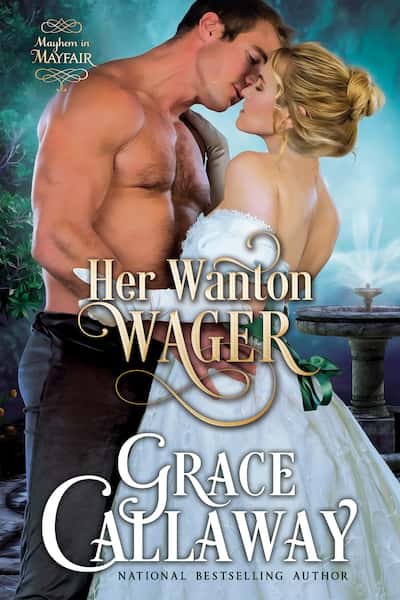 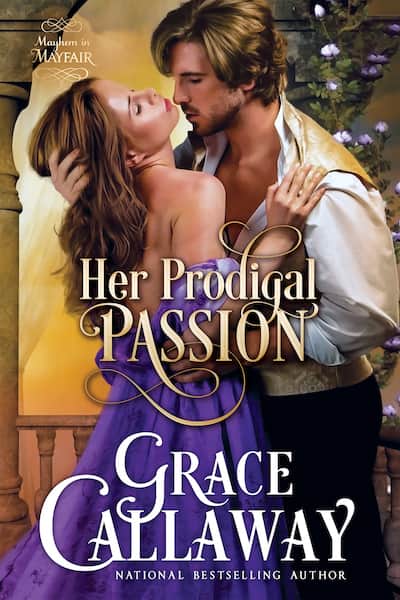