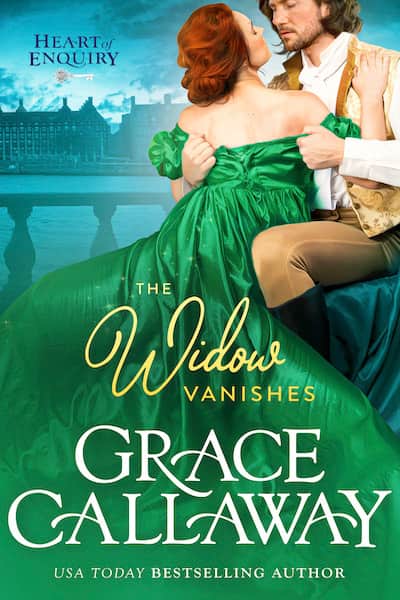 “You’ve done well,” Malcolm Todd said from the other side of the desk.

Peregrine William McLeod—known as Will or McLeod to anyone who wished to live—acknowledged the praise of the gaming hell owner with a nod. Working as a guard-for-hire wasn’t an easy living, but it was a lucrative one. Coming from a long line of younger sons, Will had to make his own way in life using the set of skills he’d acquired from his time in the regiment.

His specialty was scouting: as a member of the 95th Rifles, he’d done his share of tracking over enemy lines. He’d hunted down messengers and spies, scouted field positions and the adversary’s terrain. Even now, the memories of smoke and blood, flashing carnage, caused his battle-scarred hands to flex in his lap.

“I knew your skills would prove useful,” Todd crowed. He was a small man whose balding pate and cherubic face belied a vicious nature. “Took you less than a day to identify the thieving bugger. You’ve outdone yourself, McLeod.”

After selling his commission eight years ago, he’d thought to find peace in his native Scotland. When those plans had met with a swift demise, he’d come to London to seek his fortune. For the past five years, he’d worked as a guard on a contract basis for whoever could afford him. Unfortunately, his clients tended to be of the cutthroat variety. Given the territorial wars amongst the kings of the London underworld, Will’s ability to gather information about the enemy was in high demand.

Case in point: Will had just traced the missing cases of Todd’s finest brandy to a rival named John Harding. Disguised as a footman, Harding’s man had cleverly stowed the brandy beneath serving domes and delivered them out of Todd’s club.

“Can’t believe that Harding’s man had the bollocks to steal from me. Well, he doesn’t have them any longer, does he?” Todd said with a wide grin.

Will suppressed a shudder. He’d merely provided the requested reconnaissance; how Todd chose to act upon that information was not his concern. He felt a flash of pity for Harding’s lackey—but any bugger stupid enough to cross Malcolm Todd reaped his own reward.

“‘Tis a warning to Harding and his ilk: no one takes what’s mine,” Todd said smugly. “The world will know that I always collect my due.”

There was no doubting that Todd collected and collected well. His office and the rest of the club smacked of overblown opulence: everything was gilded, draped in velvet, or carved from the finest pink marble. The Underworld offered the crème de la crème of depravity: from gaming to drinking to auctions for wenches, any sinful desire could be attained for a price.

Will rose. “If there’s nothing else, I’d best get going …”

Though the other’s expression was jovial, Will heard the underlying command. In the tradition of undersized tyrants, Todd preferred to be the tallest man standing in the room. As Will hovered well over six feet, he thought it best to return his arse to the chair.

“Punishment and reward are two sides of the same coin. You’ve resisted my efforts to hire you on exclusively, McLeod, and I believe I know why,” the club owner said in hearty tones.

Because I think you’re a ruthless bastard and wouldn’t trust you farther than I can toss you?

For months now, Todd had been pressuring Will to become a permanent member of his staff. Will had been equally steadfast in refusing. As a contract guard, he had the freedom to pick and choose his assignments, and whilst he was no choir boy, he refused jobs that violated his moral code. He didn’t hurt innocents or mete out justice that hadn’t been deserved.

Todd had no such reservations.

In order to stay in business, however, Will had to remain in the other’s good graces. He’d negotiated a tricky balance: whilst he’d refused to become Todd’s man, he did jobs for the other on an occasional basis. Just enough to keep Todd happy and off his back.

“I haven’t yet given you proper recompense for the quality of your work,” Todd went on.

Was Todd referring to an increase in pay? Now that was a welcome surprise.

“You’ll thank me more after you’ve seen the prize.”

To Will’s puzzlement, the other man jerked on the bell pull. Moments later, the door opened, and Will rose immediately as a line of females filed in. His throat went dry as five brightly dressed trollops stood in a row before him, feathers fluttering and paste jewels glittering in the firelight. Surely his employer didn’t mean …

Giggling, the wenches performed saucy curtsies and cooed out enticements.

“Never mind ‘er. I’ll show you things you ain’t ever seen before.”

The pair of tarts in the middle ran fondling hands over each other, and one purred, “Big strappin’ fellow like you—maybe you need the pair of us, eh?”

Growing warm beneath his collar, Will noticed that the only female who remained silent was the one at the far end. Though she wore paint and a low-cut gown like the others, her manner set her apart. She was staring at the ground, her profusion of loose titian curls gleaming in the firelight. Unlike the others, she adopted no pose, just stood there with her hands slightly curled at her sides.

Her gaze lifted. Will’s breath whooshed from his lungs.

He’d never seen eyes of that shade. A cross between larkspur and violet, they glowed with a fierce inner light. The rest of her face was startlingly passionate as well. Her skin looked smooth and fine-grained beneath the paint. Her nose was bold and straight, her full, sensuous mouth made for laughing … and other activities. His gaze dropped to the rest of her, and the pressure in his veins shot up. His groin pulsed with heat, his cock rising.

Her plump, round breasts beckoned from the pink sateen bodice. The cheap fabric clung to her voluptuous form, tempting curves made to accommodate a man of his size. Hers was no frail beauty to be admired from afar, but a hardy one that promised earthly delights. His palms prickled as he imagined gripping those generous hips as she rode him, her tits bouncing, her lips parting on a husky moan as she spent …

Aching fullness settled in his groin. How long had it been since he’d had a woman? Months, at least. Nowadays, he didn’t oft indulge in paid sport. He’d spent the early years of his manhood in the army, and his first sexual experiences had been with trulls—prostitutes who travelled from camp to camp, servicing the soldiers. Those exchanges had never offered him more than a moment’s respite … and, afterward, a lingering emptiness.

Since leaving the army, he’d sought other avenues for slaking his needs. A few affairs with widows, arrangements with obliging barmaids. At one point, he’d thought he found what he truly wanted: a woman of his own. A lady to occupy his heart and his bed.

He’d been wrong. As a soldier, he’d fought countless enemies on the battlefield, yet he’d had no experience or defense against Lady Laura’s brand of assault. Her ethereal beauty and feminine wiles had taken him in completely.

Well, he’d learned his lesson. Despite an ingrained instinct to protect the gentler sex, he no longer gave his trust so easily. No longer assumed that loyalty would be reciprocated.

Even so, tonight he was tired of his cold bed and didn’t fancy being alone. Why not partake of the generous bounty being offered to him? Why not indulge in a meaningless tumble—scratch an itch that needed scratching?

“Do you wish to sample their wares before making a choice?” Todd said.

“No need.” Will crossed over to the redheaded wench and bowed. “William McLeod, at your service. Er, may I have the pleasure, Miss …?”

Her lashes fanned rapidly. “You … you may call me Bella.”

Her soft contralto sent a shiver down his spine and a tingle over his bollocks. Her voice didn’t abrade like the usual Covent Garden fare. Despite her sensual exterior, she sounded like a lady. Or, more likely, one who was versed in the ways of her betters. A maid, mayhap, or a governess? How had she ended up selling her wares at The Underworld?

What business is it of yours? he chided himself. She works for her living, same as you. Don’t go looking for a damsel in distress. His jaw tightened. The last thing he needed was another one of those. To have his heart smashed to smithereens once again.

Yet, for once, he wanted to blow off steam like any hot-blooded male. For all he knew, Bella’s manner was merely a clever act—a whore’s trick to bring up her value and asking price. Some celebrated courtesans could pass for duchesses, and perhaps she sought to follow in those footsteps. She might have the airs of a lady, but she was here for a reason. It wasn’t his place to decide for her what she needed: the choice was hers.

“Would you do me the favor of a night’s company, Bella?” he said evenly.

Though her lips trembled, her gaze didn’t waver from his.

Anticipation rolled through him.

“You’ve a good eye, McLeod. Prime article,” Todd said. “I’ll have her sent up to the best suite and with my compliments.” To Bella, he said briskly, “Go see Mrs. Clive, and she’ll get you ready. Be at the Purgatory Chamber in a quarter hour—and no dawdling about.”

Bella dipped a quick curtsy. Will couldn’t help but admire her departure: the lush swell of her bottom, the sensual sway of her hips. Aye, the night was definitely looking up.

Tittering, the tarts sent Will pouting looks as they tromped out of the office.

“Enjoy your sport tonight,” Todd said, “but report back tomorrow. This business between Harding and I ain’t finished yet, and I’m going to need your expertise to win the war.”

Will knew too much of life to expect something for nothing. But at least tomorrow wasn’t now. A trip to purgatory awaited him, and he was bluidy well going to enjoy the ride.

Return to The Widow Vanishes 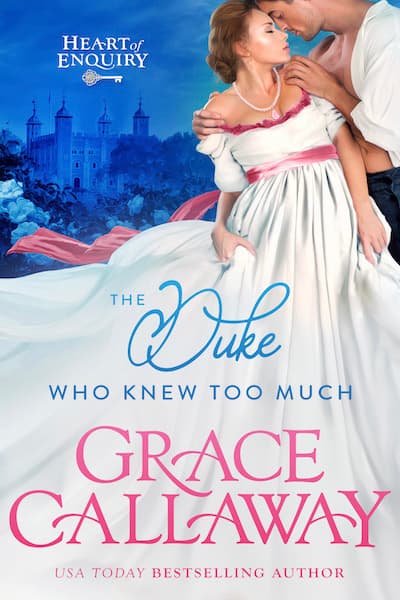 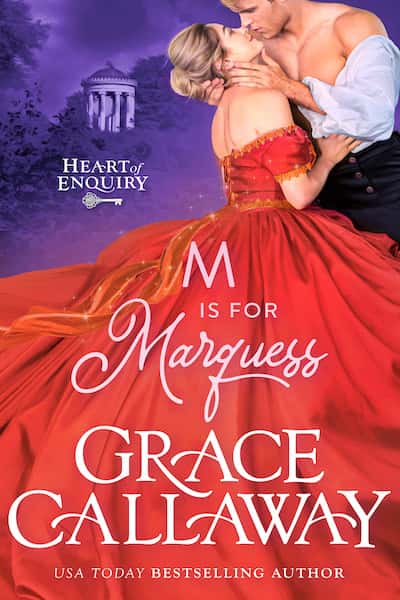 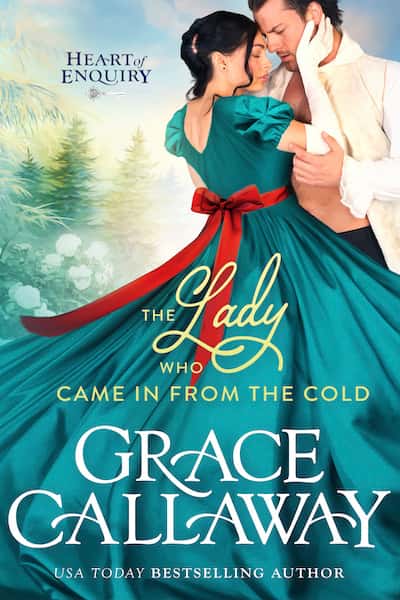 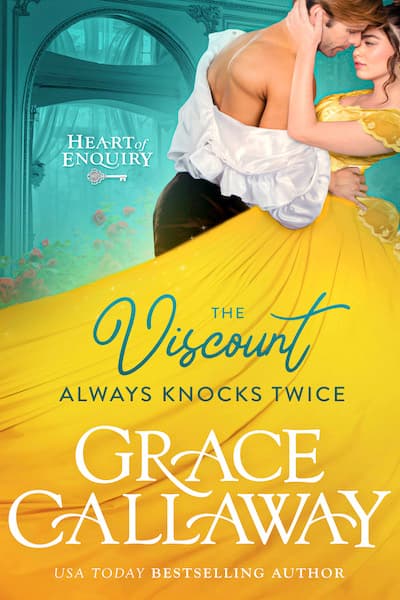 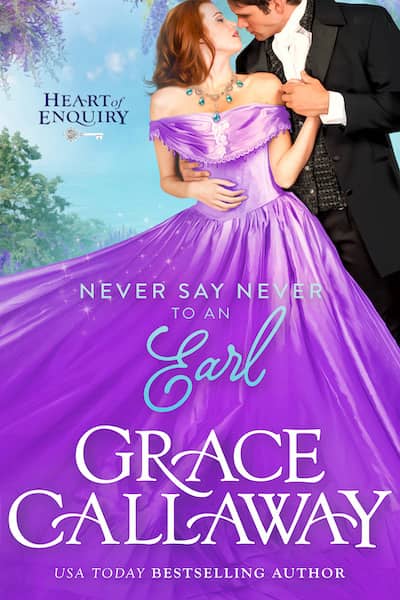 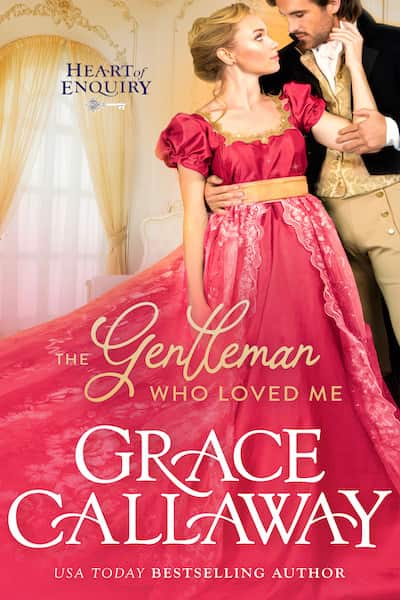